Creating Windows restore points is a good way to help to restore your computer if any troubles such as virus or advertising bots infection occur.

The restore point is a system image in which its current state is recorded (settings, appearance, installed programs). By creating and saving such a point, you can return your system to the recorded state at any time. 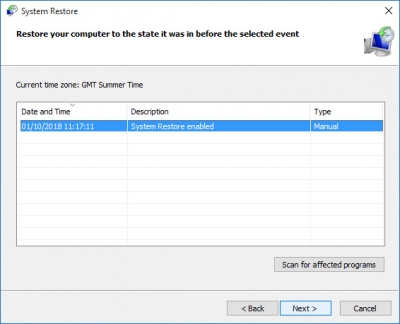 If you have opened a suspicious mail attachment accidentally, and now advertising banners appear on your computer screen (an advertising bot has been installed in your system) – with restore points you can return the system “back to the past” before the bot infects. Restore points are not absolutely troubles panacea, but very often, a “rollback” of the system saves the situation and returns the computer to a normal working state.

Windows periodically create such restore points itself, for example, when a new application is installed, however, do it not regularly and permanently.

In order to have a guaranteed restore point in your system, you can use the following command:

After its execution, a new restore point will be created in Windows, fixing the current state of the system.

Not to execute this command manually each time, let’s create a file (for example, on the D:/ hard drive) with the “make_restore_point.cmd” name, open it in a text editor (notepad) and put this command there. Save the file.

Now open the Windows Task Scheduler and create a new task in it.

On the following checkboxes:

Its necessary to the task progress is not shown on the computer screen while running.

In the “Triggers” tab, add a new trigger and set a schedule in a convenient way. For example, run once a week, on Monday at 10.00.

In the “Action” tab, create a new action, set the “Start a program” type and specify the full path to the “make_restore_point.cmd” file created earlier.

That’s all the necessary settings. Save the task. It will be automatically executed according to the schedule, regularly generating a fresh Windows restore point, which can be used to restore the system in case of problems.